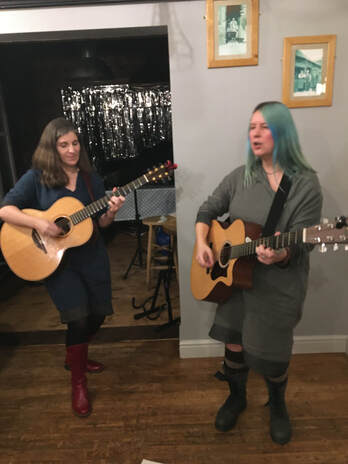 Union Jill
We welcomed the York-based duo, Sharon Jagger (green hair) and Helen Turner (not green hair), to our folk club on Tuesday 3rd March. They are singers, instrumentalists and songwriters presenting a whiff of the Indigo Girls in style. They sang together, interweaving parts rather than harmonising, to great effect.

They sang a variety of songs, blending their voices and instruments: guitars, mandolin and melodeon "the box!"  They brought a sense of fun and playfulness to their performance. During one song, two in the audience were invited to knit, adding to the great length of knitted scarf created by other audiences in other folk clubs during other gigs. After the interval, our intrepid listeners wore pirate eyepatches to tune themselves into a song about piratical exploits. Next, outcomes bubble blowers to accompany a song about a rather wicked water nymph!  These occasional playful additions enabled us to relax, laugh and enjoy the performance, as well as participate in a completely unique way.

Bridlington Folk Club send thanks to Union Jill for a great evening of excellent music, fun and laughter. Fresh ideas, and quite singular, but all in the best possible taste!
https://www.jacey-bedford.com/unionjill.htm. 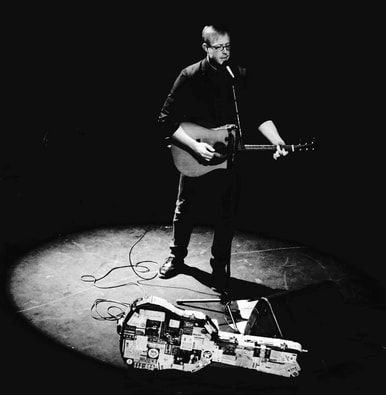 Roger made a welcome return to Bridlington Folk Club on the 19th November 2019. He is a songwriter and artist from Brighouse, West Yorkshire who specialises in songs influenced and about his West Yorkshire roots. He performed the song "Wear your poppy with pride," which he has sung with a group of children from a school in West Yorkshire, along with requested songs, "Into the sun" and "I was raised on Rock and Roll," always club favourites.

We had an exceptionally enjoyable evening packed full of Roger's own songs.

Roger is enjoying a career as an artist in West Yorkshire. He has brought out a calendar of his paintings for 2020. Check out his website for further details:
﻿﻿rogerdaviesmusic.com 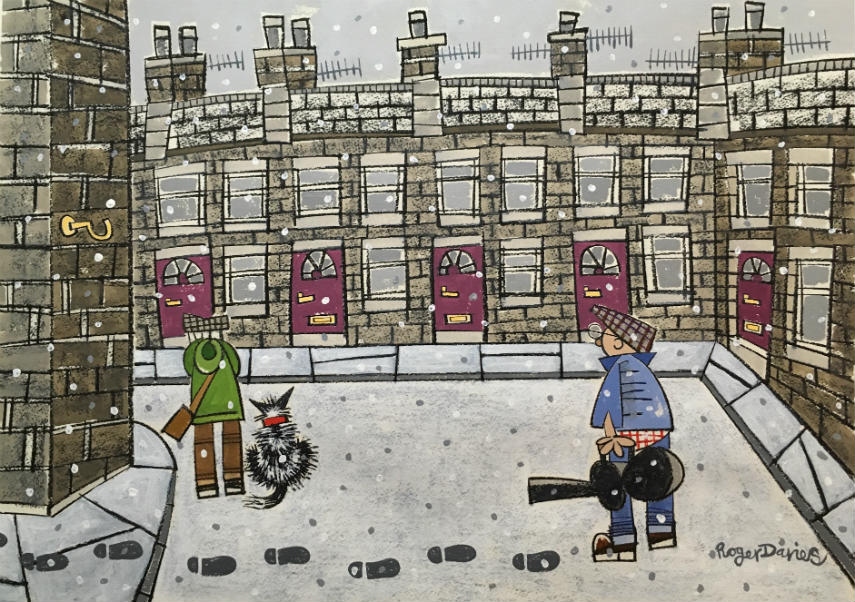 Katie Spencer, Tom McKenzie and Bella Gaffney were welcomed by Bridlington Folk Club on 16th July 2019. From the start, the quality and standard of guitar playing mesmerised the audience, setting off the vocals (mostly self-penned) extremely well.. Katie's first song started with a complex guitar part that suited her gentle voice, drawing the audience into the words and meaning of her songs. She travelled from the Hornsea area, so is considered a "local lass". In between her songs, she told humorous stories that kept the audience entertained. Tom McKenzie hails from Bradford, but lives in York, His song "Wishing Well" is fantastic and can be found on Spotify. His self composed songs were characterful and highly enjoyable, Bella Gaffney presented a mixture of traditional songs and her own compositions. She held the stage playing different guitars in different tunings and a banjo (as well tuned as ever a banjo will allow - she must have tamed it by magic!) Bella kept us enthralled with the ballad, "Little Musgrove," her own song  suggesting her negative emotions, "Must be the Devil in me," and a classic in heartbreak.  Bella, also hails from Bradford, but lives at present in York. www.katiespencer.net   www.tommckenzie.co.uk. www.bellagaffney.co.uk 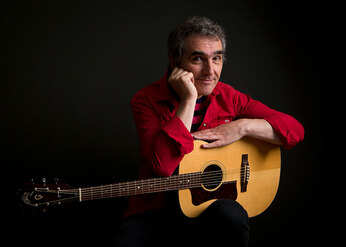 Jez Lowe - 9th April 2019
Jez Lowe visited us last week for a wonderful evening of songs that ranged from political to humorous, and gave us the welcome performance of his excellent  "Frozen Roman" song.  He kept us entranced for the evening and played to a packed audience. We couldn't fit anyone else in. He gave us some history and background to his songs, and then we all sang along, with requests being made and met for some of his long-standing popular songs. It was a great evening and we thank him for coming.

The Bad Apple Theatre Company are performing The Frozen Roman a play inspired by Jez's Frozen Roman song, with  original music and songs by Jez Lowe. It will be performed in and around the East Riding of Yorkshire over May and into June 2019. Find information on their website:
http://www.badappletheatre.co.uk/the-frozen-roman/

In 2015 Jez Lowe received a double nomination in the 2015 BBC Folk Awards for best folk singer and best new song. He is one of the busiest I've performers in the country and his sons are amongst the most widely sung by other performers.

​Jez has his own long-established band, The Bad Pennies, and his other collaborations are with The Pitmen Poets, The Bronzes, Men at Words and Steve Tilston.

Jez has written his first novel, The Dillen Doll, with an accompanying CD featuring a "suite" of traditional songs inspired by the story within it. Another book is due for publication later this year.

​Sarah and Paula gave us a wonderful evening's entertainment, with plenty of opportunities to join in the singing. Sarah played her harp and sang her self-penned songs with vibrancy and joy. Paula sang her compositions and accompanied her self on guitar and marimba.

Sarah allowed us to access the imaginative world of clouds, then had us playing with the happiest of dogs, living for the moment! Paula treated us to a haunting and sensitive, evocative setting of Yeat's poem, "If I had the cloths of heaven." 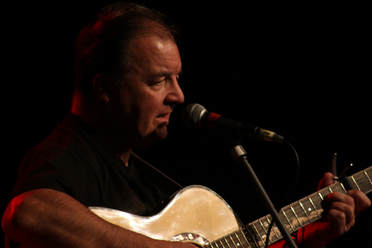 Stan Graham
Stan travelled over from York to give us a lovely evening of songs that he had written himself or learnt from others. He shared amusing anecdotes and kept us entertained with some great sing-a-long songs. He knows how to entice the audience into joining in! Thank you for a lovely evening Stan.

Stan continues to perform regularly at The Black Swan Folk Club in York, as an MC and performer, often supporting guest artists.
​ 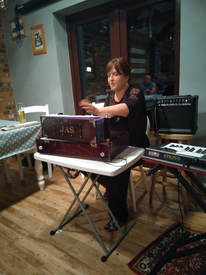 Sam Martin
Sam gave us a lovely evening full of maritime songs and songs with historical stories. She accompanied herself on keyboards and kept us entertained with anecdotes and explanations of the songs. Thank you Sam, for a lovely evening of musical folk entertainment.
​ 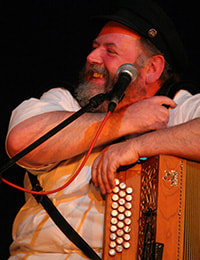 Benny Graham
Benny Graham started his folk career in the North East of England in clubs such as Birtley and the Newcastle Folksong and Ballad club. Here he developed a love of the musical culture of the North East covering rural songs, Tyneside Music Hall and the music that was drawn from the heavy industries of coal, steel and and ship building.
​
Benny worked as a solo performer, then formed a three-part harmony band, Pegleg Ferret, and toured the UK and continent. He has worked as a singer and songwriter in schools and theatre companies, creating new drama and song. 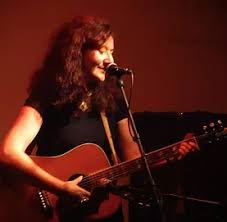 Rachel Dawick - 8th May 2018
Rachel is both a folk singer and a story teller. She writes:
"Writing a song for me is about creating a new character and becoming part of their brief journey.  To see them standing in front of me, visualise their walk, their mannerisms, hear their voice, and understand their story is to feel ready to begin to write their song."
This proved to be very true when she visited the Bridlington Folk Club in May. She brought her characters alive, and the sung the song of their life and their character. She has completed extensive research about real people taken from history, and the places they lived. A fascinating evening, presenting story, folk song and theatrical song to entertain us. 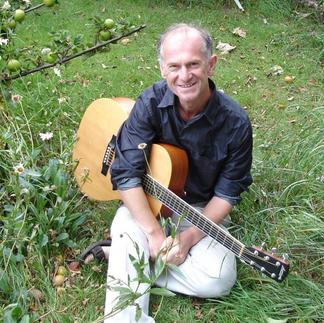 Gordon Tyrrall - 27th March 2018
Gordon Tyrrall travelled from West Yorkshire to visit us in March, and presented an interesting and enjoyable evening of music and songs. Some of his songs were inspired by his travels in Japan. He also played favourites such as Ca' The Yows, words by Robbie Burns.  His instruments are guitar and flute, and at our folk night he played complex reels on his beautiful wooden flute for us to enjoy.  He currently plays with the band Roisin Ban.
​ 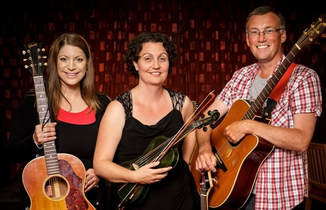 The Miles Roses
A thoroughly enjoyable evening was held on November 7th, at The Telegraph, when The Miles Roses played at a guest night and entertained the folk club with their songs and musical accompaniment.

​They have a musical interest in both British folk and the transatlantic connections to new country and Americana. They played original songs with harmonies, accompanied by guitars, bass, cittern, mandola, mandolin and fiddle.
Look them up on www.themileroses.weebly.com

​​
Jeff Warner
​An enjoyable evening was held with Jeff Warner from Portsmouth, New Hampshire, USA on Tuesday 12th September. He played Banjo, Spoons and entertained the audience with his Jig Man! His repertoire included songs from the lumber camps, fishing villages and mountain tops of America connecting the audience with the everyday lives–and artistry–of 19th century Americans. A great evening!

Scold's Bridle did not receive their name for no reason! (They said it, well, Sue did!)  Plenty of anecdotes, an excellent joke or two, and a lovely ambient welcome into their world of music and song. Thank you Sue and Liz for a lovely evening.